The Birkhall portable steam engine was built in 1942 by Marshall of Gainsborough to an order from the wartime Ministry of Supply.

Portables were produced in large numbers from around 1840 and were used to drive farm machinery and as a general power source. Unlike a road locomotive or traction engine, power is not transmitted to the wheels. Portables were moved originally by teams of heavy horses and later by traction engine or tractor.

When the Birkhall was built, portables were already a past technology.  They enjoyed a brief resurrection during the last war, when oil was very scarce.  The Birkhall is one of the last to be built but is identical to its 19th century counterparts.

The engine was used to power a sawmill at Birkhall on the Royal Balmoral Estate. After delivery, its wheels were removed and discarded and the engine was mounted on a fire brick base. The fire box was modified to burn sawdust and waste. The engine, in this semi-portable form, powered the mill until it closed in the early 1970s.

In 1985, His Royal Highness The Duke of Edinburgh donated the derelict engine to the museum and Balmoral Estates assisted with the cost of asbestos lagging removal. The wheels and undercarriage were discovered close by where they had been discarded, now surrounded by mature trees! In 1986, the engine was dismantled and transported to the museum.  Rigblast of Aberdeen blast-cleaned and primed the boiler and cylinder block and a lengthy fund raising appeal followed.

His Royal Highness The Duke of Edinburgh attended the first public steaming of the restored engine. He acknowledged, on behalf of the museum, the generosity of the numerous organisations and individuals that made the restoration possible. 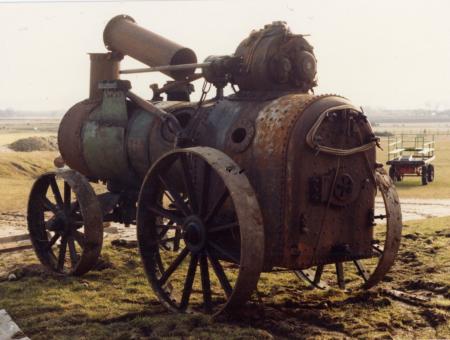