The nobility and high-ranking officers adopted the travelling chariot, a privately owned post-chaise, for long journeys.  This particularly fine and original example was built by Rawlins of London for the Innes family of Raemoir House (now a hotel), near Banchory, on Deeside.  The hand-painted family crests have survived in remarkable condition.

The Innes family used this carriage mostly for local journeys but travelling chariots were largely used for long journeys; often for touring continental countries.  Two or four horses were used, controlled by postilions or postboys, and family servants and grooms rode in the ‘rumble seat’ at the rear.

The rounded case in front of the rumble seat is for holding swords and other weapons.  The case is accessible only from inside the carriage.

The family’s own horses would start, and perhaps finish, a long journey.  All intermediate stages of up to 25 miles would depend on horses and drivers from post houses along the route.

Travelling chariots were popular mainly between 1795 and 1825 and used the turnpike road network in Britain extensively. 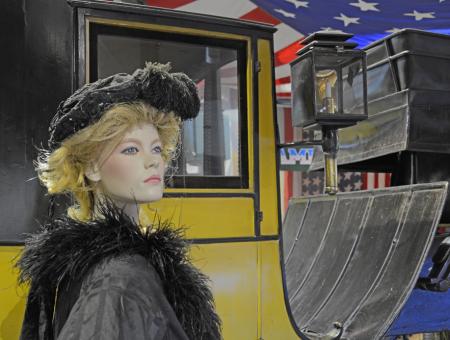